From The RBI Baseball Database
(Redirected from Lopes)
Jump to: navigation, search 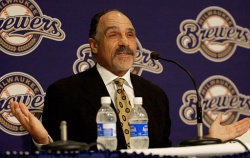 "This team stinks, what did you expect?"

Davey Lopes should have been the leadoff hitter for Houston instead of the crap that is Billy Hatcher. His power, speed and moustache are far superior. All serious RBI Baseball players make this substitution immediately.

Born all the way back in 1945 in Rhode Island, Lopes is most remembered for his role on the Los Angeles Dodgers in the 1970's. He stole a shit ton of bases in his career, 557 the exact number with a personal best of 77 in 1975. Lopes is proof positive that they don't make `em like they used to.

Lopes is currently the first base coach of the Washington Nationals.