From The RBI Baseball Database
(Redirected from Puhl)
Jump to: navigation, search 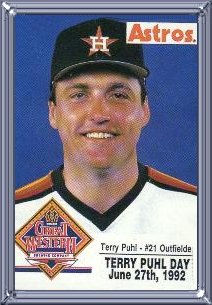 Terry Puhl is a bench player for Houston on the NES version of RBI. As an RBI'er, Puhl is a relatively mediocre batter, even for the Astros. Though probably the worst sub on the Astro bench, Puhl's left-handed bat makes him a nice situational hitter.

Despite being on the worst hitting team in RBI by far, Puhl should probably not be a full-time starter. Though there are many holes in the Houston lineup, Puhl's 768 power rating is the lowest among Astro subs. His big benefit is the fact that he's the only left-handed hitter on the Houston bench. This makes Puhl much more valuable for late inning sitations to utilize pitcher-hitter matchups with the pinch hit bonus. Puhl isn't exactly terrible, but can be quite effective if used properly.