Bad Company documents the trouble RBIers got into together and conflicts they had with each other. 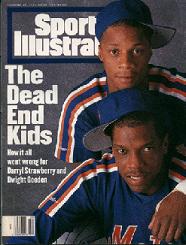 In 1986, Gary Carter played third base and Jesse Orosco and Roger McDowell spent time in right field in a 14-inning, 6-3 victory in Cincinnati. The ejection of third baseman Ray Knight -- after fighting with Eric Davis -- allowed Carter to play third.