From The RBI Baseball Database
(Redirected from Meat)
Jump to: navigation, search 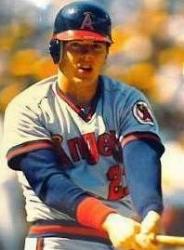 Wally Joyner is a stud in RBI, there is no doubt. Joyner and Reggie Jackson make one of the most feared back-to-back duos in the game. The success of Meat (Joyner) and Potatoes (Jackson) is legendary, and they often end up carrying the Angels in games. Though his power rating isn't overwhelming, Joyner simply gets on base a whole lot. He's probably the toughest out on the Angels and a solid all-around player. Most people rank Joyner among the top 10-20 players in RBI.