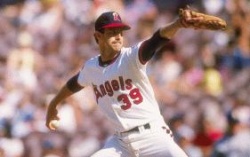 Mike Witt is a starting pitcher for California on the NES version of RBI. Witt is one of the most solid pitchers in the game. He doesn't do anything great, but he does everything well. Playing curve pitch style, you should be able to get 5 to 6 solid innings out of Witt. This is a must, because the rest of the pitching staff isn't going to give you much help.