From The RBI Baseball Database
(Redirected from Ruppert)
Jump to: navigation, search Ruppert Jones in his early MLB days with Seattle

Ruppert Jones is a bench player for California on the NES version of RBI. He is widely regarded as one of the top pinch hitters in all of RBI, only surpassed unanimously by Mark McGwire of the AL All-Stars. Jones is a left handed hitter, sports a ton of power and has respectable speed. It's not a matter of when Ruppert should go on, it's a matter of where he should bat. More recently, he was the answer to a trivia question which gave forum member JerryD a prize package. 1 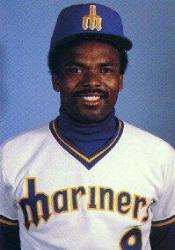 Ruppert really does it all in RBI. He's a huge bat off the bench, sports nearly 900 power and is fast enough to stay out of trouble. His contact rating is terrible, but it rarely affects his ability to go yard or get singles. Jones has enough pop that he has little trouble going yard off a lefty pitcher in straight pitch, a problem of many lefties.

The big debate is where to put Ruppert in the lineup. There is usually a 50/50 split with people who sub Ruppert at leadoff for Gary Pettis compared to others who sub him for Bobby Grich at the six spots. Proponents of the leadoff spot feel that Jones should get as many ABs as possible, while others feel that the #6 spot in the lineup gives him more chances to drive in runs. There is no right spot for Jones, it's a matter of having a strong top of the order versus a strong middle of the order.